THE IMPORTANCE OF FLYING FOXES 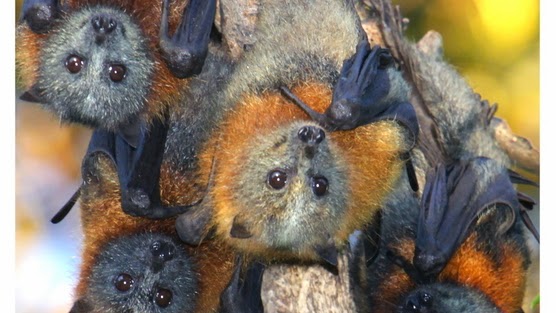 Valley Watch member Linda Wright has started a petition to NSW Minister for the Environment Rob Stokes calling on him to promote work towards the satisfactory co-existence of humans with lying Foxes in all roosts in NSW, including those of the nationally endangered Grey-headed Flying Fox. The link to the petition is at the bottom of this post.

Linda outlines her case about the importance of flying foxes below.

Flying-foxes are regarded as a keystone species in our forests because they spread  seeds and pollinate blossoms over larger areas than do birds and insects. Forest health depends upon Flying-foxes. Many trees, particularly commercial hardwoods, produce their nectar specifically atnight, when Flying-foxes are at work, and would not survive without them.


As human population expands further and further into Flying-fox  habitat and destroys more and more of it, there is greater contact. The media spreads hysterical misinformation. People do not realize that not only are these animals indispensable to our forests, but they are also intelligent,  highly social, clean and attractive.

Health professionals, including from NSW Health,  tell us that the health  risk posed by them is minimal, given  sensible human behaviour - if we simply don't touch bats, we cannot become  ill from them.

Attempts to move roosts ('dispersals') are expensive, and often the animals move to a less favourable location.  In most cases the animals continually return, and repeated disturbance of them incurs more expense and inconvenience to local people. Disturbances are also cruel as they result in high-level stress for animals that would normally be asleep, which may be pregnant, or have dependent young. They can cause mass loss of unborn babies, and of young due to separation from their mothers.

As Flying-foxes only have one young per year, their populations  are slow to recover from losses through persecution, droughts, and mass mortalities from heat stress. Disturbances are no way to recover a  threatened species!

Culling is never an  option because the animals are migratory. If local animals are removed others will simply take their place. Furthermore it is cruel. No method ensures a quick clean death. Nor is the 'training' of the animals in a roost a viable option due to the transitory habits of Flying-foxes - it would be impossible for  'training' to be done on all the animals that may visit a roost at different times.

The great need is for better public education and management of roosts without attempting to move them. We need to take responsibility for protecting Flying-foxes and their habitats and to make sure there are enough food and roost sites.

Good management of existing roosts includes providing buffers to residential areas and educating people about these animals. We need to accept the advice of our health professionals, to understand the importance of Flying-foxes to our natural landscape, and to find it in ourselves to live alongside wildlife as best we can.
- Linda Wright
LINDA'S PETITION

Posted by Clarence Valley Conservation Coalition at 2:04 am

THE ADVANTAGES OF LED STREET LIGHTING


LED (light-emitting diode) use has increased dramatically in recent years.  LEDs are now widely used for a range of lighting applications including traffic signals, vehicle headlamps and room lighting because of their low energy consumption and long lifetime.

They are also being used for street lighting. In a notable Australian example the City of Sydney in March 2012 began a three year process of replacing a total of 6,448 conventional street lamps with LEDs.  After 16 months the city had reduced energy usage by more than 27% - in the process saving $300,000 and reducing carbon emissions by 1,547 tonnes.

This example, as well as overseas examples, should be encouraging the changeover more widely throughout Australia.

The Institute of Public Works Engineering Australia (IPWEA) is concerned that the ownership of public street lights by electricity distribution authorities has led to the avoiding or deferring of installation of these more efficient, environmentally friendly LEDs.

In Australia local councils are responsible for provision of public street lighting which costs these councils collectively over $400 million per year.  Yet 90% of these street lights are owned and maintained by utility companies.  The IPWEA believes that this has produced a conflict of interest where there is no real incentive for power suppliers, who are in the business of selling electricity, to reduce its consumption by installing more energy efficient lights.

According to the IPWEA the changeover to LED street lamps would bring tremendous benefits to both local councils and the environment, halving power consumption and reducing Australia's CO2  emissions  by as much as 720,000 tonnes per year while also saving councils throughout the country as much as $87 million collectively.

The IPWEA also believes LED street lighting brings other advantages. Traffic safety is improved because of the clarity of the whiter light enables drivers to react better to emergencies and maintenance expenses are significantly lower for LEDs.

Perhaps the Federal Government could become interested in a national changeover program.  After all, changing the nation's street lights to LEDs could be a really effective form of "Direct Action" in reducing carbon emissions.

This article was published in the VOICES FOR THE EARTH column in The Daily Examiner on August 18, 2014.

Posted by Clarence Valley Conservation Coalition at 5:01 am

Clarence Valley Council's Living Sustainably Awards were announced on August 6, 2014.  These awards were instituted in 2011 to recognise outstanding contributions or achievements which enhance environmental, economic and social sustainability.

As well as honouring achievement they serve an additional valuable purpose in showing the general community what some individuals and groups are doing to meet the challenges of today in a sustainable manner. Hopefully their example will encourage others to adopt sustainable practices.

The awards have four categories - individual, community, schools and business.

1) Individual - Dr Tony Courtice, who lives with his family on a proprty at Hernani and is passionate about sustainability in all aspects of his life - from his solar farm to his farming practices.

2) Community -  Clarence Valley WIRES which was nominated for its 25 years as a leader in wildlife rescue and care as well as community education.  It has received over 77000 calls for animal recsues and information. It is estimated that 50% of in-care animals are successfully released back into the wild.


3) Schools - Dundurrabin Public School is a small school in the west of the Clarence LGA.  It prides itself on its commitment to environmental education and sustainability.  Staff and students are involved in recycling waste, reducing water usage, composting, the waterwise program, saving energy and using recycled materials.  Students participate in weekly cooking lessons using fresh organic produce from the school and local gardens.

4) Business - Jamie Kenneally poineered resource recovery in the Clarence Valley over the last 30 years.  From humble beginnings from an old tin shed in South Grafton in 1983, Jamie built a business around recycling, winning contracts with Council to operate the Grafton recycling centre from 2002 to 2013.  It is estimated that Jamie's contribution to resource recovery is approximately 66000 tonnes of recycling or three years of landfill space.


Posted by Clarence Valley Conservation Coalition at 4:16 am