The way potential impacts on threatened species are assessed when compiling an Environmental Impact Statement (EIS), has always been a concern. This was highlighted recently when Essential Energy decided to move a transmission line in Lawrence, east of Grafton.

Despite assuring concerned citizens that they always minimise environmental impacts, their plan would arguably have had the greatest possible impact.

That choice required the removal of twelve old-growth eucalypts, including one Forest Red Gum where Koalas are regularly sighted. The ecologist's report also made the patently erroneous claim that the 200 year old trees had “few if any hollows”, and a legal requirement that an EIS must contain“a description of any feasible alternatives”, was ignored.

A search for those “mitigation measures”, found only an assurance that tree removal would not occur during their breeding season. For the 6 identified micro-bat species, that period was identified as spring. However, where micro-bats are involved, there is a well-recognised season when clearing should not occur, that is winter when they go into a type of hibernation known as “torpor'. Unsurprisingly, that fact received no consideration.

When that anomaly was raised, the response further highlighted their knowledge gaps, claiming bats live under loose bark on trees, and as the trees in question were smooth barked, they were unlikely to be used as habitat. The fact is that, while there are bat species that live under loose bark, none of the 6 identified species do that, with most known to use tree hollows.

Fortunately, locals have done their homework, and identified a route option which required virtually no tree removal, and that option is now under consideration.

This article was originally published in the VOICES FOR THE EARTH column in The Daily Examiner on April 15, 2019

Posted by Clarence Valley Conservation Coalition at 3:26 am 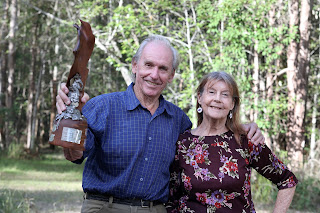 In a recent Media Release the North East Forest Alliance (NEFA) condemned the Labor Party for its plans to develop a bioenergy industry to burn native forests for electric power.

“In a week where we've seen even the National Party Federal Agriculture Minister recognise the importance of forests in sequestering carbon, the Labor Party has completely ignored one of country's most important carbon capture and storage systems, its forests.

“Worse than that, they have pledged millions of dollars to develop a bioenergy industry both here and via exports. The only current fuel source of scale for bioenergy is native forests. The burning of wood for electricity is a major international perversion of greenhouse gas accounting rules, that sees it counted as a no emission energy, when in reality it produces more carbon dioxide than coal for the same amount of energy produced, as well as removing the trees needed to absorb the carbon released,” she said.

“We know the NSW Government is full steam ahead with a logging regime that will see hundreds of thousands of tonnes of trees from our forests, available for export. We know that Boral and Forestry Corporation of NSW along with other State government logging agencies went to Japan offering our forests to meet Japan's growing bioenergy demand.

“Now we have the Federal Labor party pledging to throw money at an industry that will devastate our forests, dry out our catchments, push our native wildlife closer to extinction and increase our carbon emissions while removing the very trees we need to take up the carbon we release.

“To say we are disappointed with Labor's backflip over burning native forests for electricity is an understatement. We're devastated. We thought Labor really understood the climate change issue, but they've completely missed the elephant in the room.

“We will be withdrawing our ads from circulation that suggest Labor will do something about forest destruction. All they've got on offer is a Forestry Summit and a Forestry Industry Strategy. There's nothing there for those of us who see forests as more than wood,” Ms Russell said
Posted by Clarence Valley Conservation Coalition at 6:00 am

NSW TIMBER INDUSTRY HISTORY NOT ONE TO BE PROUD OF

The history of the timber industry in NSW is not one to be proud of, and as far back as the 1800s concerns were being raised over its behaviour.

In December 1874, the “Town and Country Journal” published an article which claimed: "Our posterity may yet rue the reckless destruction of good marketable timber, that has now been going on for forty years or more, in all the cedar, pine, and hard wood scrubs and forests that once covered and adorned the rich alluvial soils that lie adjacent to the coast, from the Moruya to the Tweed”.

“No man can traverse these districts without observing with astonishment and indignation the utter disregard of national interests”.

The writer's prediction that: “The annual consumption of cedar in the Australian colonies is such that at this rate the present decade will see the end of the cedar trade”, proved depressingly correct, and by the mid-1880s Red Cedar was all but extinct.

For the next 50 years, the industry turned its insatiable greed to the magnificent Hoop Pine forests, stripping every available dry rainforest pocket to provide box wood, something that only ceased with the introduction of cardboard cartons.

Regulations have been tightened, but industry attitudes it seems remain. In 1999, knowing that fast vanishing old growth forests were about to be protected from logging, Forestry targeted as much old growth as possible before the legislation was enacted in 2000.

A few years later, the Carr government finally fulfilled the promised transfer of numerous state forests to the national parks estate. Predictably, all had every available log stripped from them before the hand-over, much of it leading to weed invasion and die-back.

Today, with enormous pressure to declare a Koala National Park on the North Coast to help halt the rapidly declining numbers of Koalas, it seems the state’s Forests Corporation has a new focus. Using changes recently introduced to the Integrated Forests Operations Approval, it has introduced a clear-felling regime affecting some 140,000 ha, containing what is arguably the best Koala habitat remaining on the north coast.

This article was originally published in the VOICES FOR THE EARTH column in The Daily Examiner on April 1, 2019.
Posted by Clarence Valley Conservation Coalition at 3:52 am