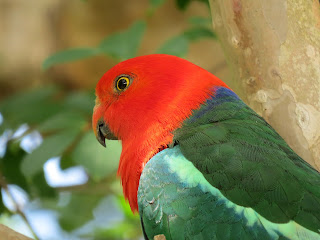 For a selection of photos taken by keen Clarence birdwatcher Maureen O'Shea see  the photo page on this blog.
Posted by Clarence Valley Conservation Coalition at 3:22 am


The Foundation for Australia’s Most Endangered Species (FAME), established in 1993, is an organisation which directs the funds it raises to saving endangered species.  It forms partnerships with like-minded organisations, wildlife authorities and private landholders on projects that increase the likelihood of endangered species survival. Some of its recent projects have been centred on the Mountain Pygmy Possum in Victoria, Bridled Nailtail Wallabies in Queensland, and the Tasmanian Devil through the Devil Ark in the Hunter Valley.
A current project involves the Western Quoll (Dasyurus geoffroii) ,once common across around 70% of mainland Australia, but which became restricted to south-western Western Australia.  This quoll, a carnivorous mammal about the size of a cat with greyish red fur and white spots, once was important at the top of the food chain in arid regions.

FAME is working with the South Australian Department of the Environment to reintroduce the quoll to arid and semi-arid areas starting with the Flinders Ranges in South Australia.
In 2014 41 quolls from Western Australia were relocated in the Flinders Ranges on a trial basis. This trial was successful as the majority of the quolls survived and more than 60 young were born. In May last year a further 37 adult quolls were released to bring the population of the new colony to over 100 animals.

Originally the Flinders Ranges was home to 54 native mammals but only 28 have been recorded there since 1970. This decline has resulted from habitat change due to livestock and rabbit grazing and the impact of introduced predators.   Improved pest management since the 1990s means reintroduction of species to the Ranges is more likely to succeed.

FAME is also involved in reintroducing the Brushtail Possum to the Ranges. In mid-2015 79 Brush-tailed Possums from Yookamurra Sanctuary, an Australian Wildlife Conservancy reserve near Swan Reach South Australia, were released along river red gum floodplains and creek lines.  Half have been radio-collared so that a check can be made of how they are adapting.

If these two projects are successful, the Flinders Ranges mammal species count will rise to thirty.

This post originally appeared in the VOICES FOR THE EARTH column in The Daily Examiner on 25 January 2016.
Posted by Clarence Valley Conservation Coalition at 3:24 am


Criticism of the NSW State Government’s attitudes towards environmental protection is growing. One example is the recent claim that the Baird Government is engaging in a war on trees in urban areas.

Jeff Angel, Executive Director of the Total Environment Centre (TEC), has pointed to government decisions over the last 18 months which support this view.

The first he identified is the 10/50 rule allowing landowners to remove trees which could pose a bushfire risk in bushfire-prone areas. The Government ignored concerns about loopholes in the code and the possibility it would be abused.  As a result many mature trees across the “leafy” suburbs were felled without clear evidence that bushfire risk would be mitigated.  This poorly thought-out code allowed developers to clear blocks and home-owners to improve their water views.  Community and local council concerns have since forced three separate changes to the code.

Another major urban vegetation loss will be in the Wolli Creek area (in Sydney's south) with the destruction of a threatened vegetation community when the West Connex road is built.  All told the TEC lists over 20 current attacks on urban bushland in Sydney.

A recent incident causing considerable community anger is the removal of mature trees, many of them large figtrees – some over 100 years old – along the Alison Road and Anzac Parade light rail route in eastern Sydney.  Suggestions from local residents and Randwick Council about alternatives to felling these significant trees were ignored by the government. Eight young replacement trees will be planted as an offset for every mature tree removed.  All very well - but as Jeff Angel states, “They cannot replicate what is lost in any useful time frame.”

While the Baird Government is overseeing the clearing of mature urban trees, the Federal Government is planning to increase urban tree canopies to assist in cooling cities to combat the effects of the rising temperatures cities will experience with climate change. In a  recent article Oisin Sweeney, Science Officer of the National Park Association of NSW (NPA)  has used this as an example of the contradictions and inconsistencies in the approach of the Federal and NSW State Governments on environmental matters.  Such inconsistency would perhaps be understandable if these governments were from different political parties - but both are Liberal-National Coalition.

The NSW Government’s vegetation policies will affect non-urban areas because it is abolishing the Native Vegetation Act 2003 which was introduced in order to stop broadscale land clearing.  Given the Baird Government's poor environmental record there are real fears that the new legislation replacing the 2003 Act will downgrade environmental protection in response to urging from farming interests.  With so much native vegetation  already lost there are concerns about the survival of many flora and fauna species if the new legislation offers diminished protection.

Posted by Clarence Valley Conservation Coalition at 4:26 am