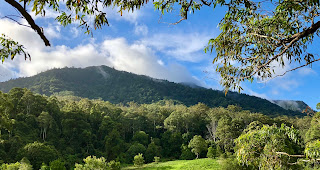 A spark, a puff of smoke, and the tinder dry eucalypt forest erupts into flames. The ‘Beast’ has risen.

Eighteen months ago a fire gains momentum, there’s no attempt to stop the Beast as it begins to consume the bush, state forest and all in its path.

For over two weeks the Beast burns out of control. Burning through forests, threatening the town of Woodenbong and even burning on top of Mt Lindsay as it continues on its all consuming path toward National Park and rainforest.

After prolonged drought and surging temperatures the rainforest is alarmingly dry. Mount Clunie, a World Heritage National Park of considerable ecological significance lay in its path, a tasty morsel for the raging Beast.

By this time the Beast begins to devour its way up the side of Mount Clunie. Locals and RFS (NSW Regional Fire Service) buzz into action, a National Parks Ranger urged on by our friend Don, landowner Jim and mates climb into the rainforest with leaf blowers in hope of saving the giant stinging tree and the surrounding forest giants.

After two weeks of near non-action the powers at be finally (but much too late), decide it’s time to act.

Time to quiet the Beast.

Mount Clunie road is bulldozed along both sides, with sandpaper figs, cunjevoi, hoop pines, palm lilies and a myriad of young rainforest species bulldozed off the side of the road and pushed down into the rainforest gullies below.

Forest Corp (in their wisdom) carve a 2 lane highway across the side of Mount Clunie. RFS proceed to back burn. Then, they leave. The back burn is left to its own devices and unleashes a new Beast that burns up the rainforest ridges to the top of the mountain . . .

This is my ‘heart place’. The devastation is immense, not only from the Beast, but from the poorly managed actions of the RFS and Forest Corp - the road they bulldozed across the rainforest has literally torn the heart out of Mount Clunie.

Forest giants attacked by the Beast can still occasionally be heard crashing to the forest floor.

On my first visit to Mount Clunie since the Beast unleashed its fury I was devastated, burnt and black, far worse than I expected. The flooded gum forest bordering the rainforest left with little leaf cover and the ground black and charred. My favourite section of rainforest with walking stick palms, palm lilies and bangalow palms bulldozed into oblivion, some with their charred remains trying valiantly to cling to life. 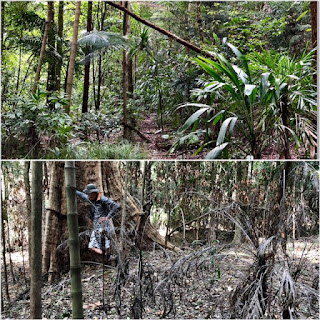 A flora and fauna study undertaken following the fire at Mount Clunie estimated it would take 300-400 years to regenerate, and that doesn’t take into consideration the effects of climate change.

There is now some initial regrowth of pioneer species in the bulldozed areas but the inundation of weeds where the canopy no longer exists is mind blowing. The biggest concern being invasive weed vines which spring up in profusion.

On my last visit heavy rains had brought life to the unburnt forest where the ferns and mosses were a welcome sight almost glowing with vivid greeness. Young trees were sprouting from the forest floor. A few walking stick palms, still charred, showed signs of new growth. I gently touched one and said “come on you know you can do it.” The fabulous giant stinging tree and surrounding forest giants, thankfully, survived the Beast. 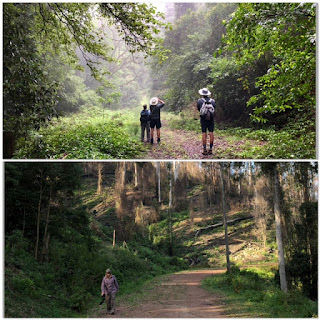 Water the lifeblood of the rainforest always bringing forth new life.

One story from the apocalyptic fires of 2019/20, only one of so many. So many creatures and biodiversity lost. Lost from our lifetime. I have to admit I was heartbroken. I wasn’t prepared to see the devastation to ‘my heart place’.

If we are to protect our precious National Parks and special places, managing fire, protecting threatened species, increased staffing and sound environmental legislation must be given top priority. As we face ‘the new normal’, we must continue our fight to save the beauty and diversity of planet earth, even though it can be heart wrenching.

I urge you to read a book written by Jonica Newby: Beyond Climate Grief.

Jonica, a science reporter, tells her story of finding courage when climate change overwhelmed her.

“It reminds us of the love, beauty and wonder in the world, even amidst disaster. And how we all have a touch of epic hero inside.”