The number of community members outside  Metgasco's Glenugie drill site increased this morning because of the expected arrival of the drill rig. The crowd continued to grow throughout the day.

During the morning a truck carrying equipment and a number of other smaller vehicles approached the site.  These were delayed for some time because of an accident with a bicycle and traffic congestion near the site.

Community members entered into the spirit of the season singing carols around a Christmas tree which had been placed in front of the entrance to the drill site.  The crowd  effectively blocked the entrance so that around 4 pm the Metgasco convoy left the site.

It is expected that they will return tomorrow - presumably with an increased police presence.
Posted by Clarence Valley Conservation Coalition at 3:40 am 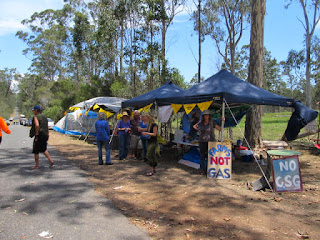