Barry O'Farrell, Premier of NSW, announced on 30th May that the NSW Government will allow recreational hunters into 34 of the state's National Parks, 31 Nature Reserves and 14 State Conservation Reserves in order to secure Shooters Party support for further electricity privatisation.

This is yet a further cave-in to the marginal blood sports lobby that began under the former Labor Government which also did sleazy back room deals in order to get legislation through the upper house of State Parliament.

What is significant about this deal is that the Premier promised the people of NSW that he would not be allowing recreational hunters into National Parks.  So here we have another politician, another broken promise.  Is it any wonder that ordinary people have little respect for politicians?

Although the deal is all about expediting the selling off of community-owned electricity assets, Mr O'Farrell has tried to clothe it in a veil of respectability by claiming it is a good thing for the State's National Parks.  He claims it is a "sensible measure" aimed at removing pests – i.e. feral animals such as pigs, goats, foxes and rabbits. This claim is laughable.  National Parks officers already run professional pest eradication programs in National Parks.  Opening our National Parks (not the politicians' or the hunters' national parks) to those to whom killing is an enjoyable recreational activity is a retrograde step which ignores the purpose for which National Parks were dedicated.  And any suggestion that these hunters are anxious to invade our national parks to save native wildlife is ludicrous.

National Parks and Nature Reserves are special areas for biodiversity conservation and activities such as bushwalking and the enjoyment of the natural world.  Recreational hunting is not compatible with these activities.

Letting hunters loose in the National Parks Estate will pose a safety threat to those community members who want to enjoy nature in what will become hunting preserves.

Moreover, there are concerns that these hunters are always anxious to see the stocks of target animals maintained so that their "sport" will continue to flourish. Presumably, there will never be a serious effort at eradication.  So what will the general community gain ?

Since it gained office, the NSW Government has increasingly demonstrated its lack of interest in protecting our natural heritage.  The Premier's latest attack suggests that the Government is waging war on the environment and those who value it.

RALLY AGAINST CSG IN LISMORE

Clarence Valley residents joined other Northern Rivers residents in Lismore on Saturday 12 May to protest against coal seam gas mining in the region.  After assembling in Riverside Park they marched through the Lismore CBD.

A Clarence Valley protester aroused a great deal of interest with the clever Gasfield Cafe sandwich boards she wore for the march. 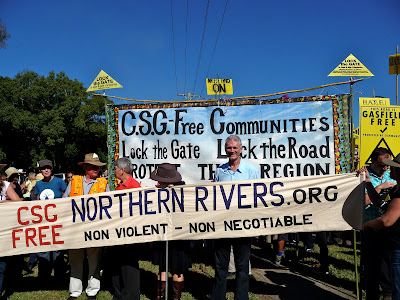 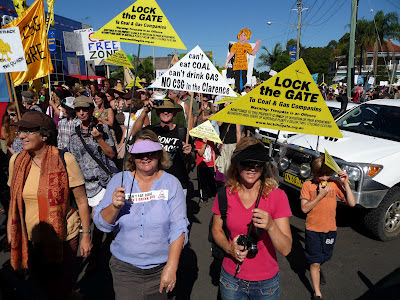 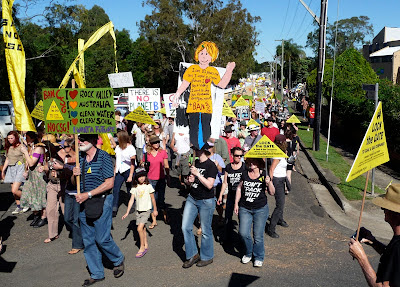 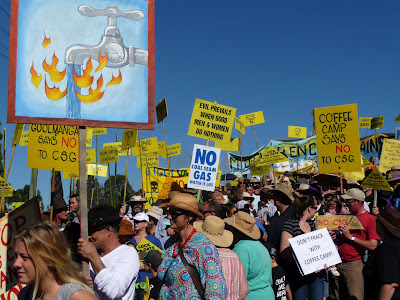 Posted by Clarence Valley Conservation Coalition at 5:45 am