Far too often we humans stand beneath a tree, look up at a koala on a branch far above our heads and say in a voice loud enough for him to hear, “Our interests are more important than yours.”

The koala may answer softly, “No tree, no me.”  He could have added, “And if my home is threatened, then so is the diversity of other flora and fauna that share the same ecosystem with me.”

But we fail to hear.

Forested areas are cleared to make way for our developments – urban areas, agriculture, roads and highways – and loss of habitat, the number one threat to a healthy koala population, takes place.

The precious habitat areas that remain are fragmented and isolated, and on koalas trying to exist in these pockets the pressure builds and serious issues quickly arise.

There is now excessive energy expenditure on greater ground movement as koalas search for the scattered food trees.  As they move across highways, fences, car parks, and backyards, they face a myriad of problems from motor vehicles, dogs and swimming pools.

The greatly reduced habitat areas lead to a greater density in the remaining koala population.  There is now increased competition for food and many are forced to eat poorer quality leaf.  There is also a greater tendency for inbreeding, and thus a lower genetic quality animal.

Historically koalas have not been treated well.  Up until 1930 around 2 million koalas were “harvested” for the fur trade.  A public outcry resulted in a change and koala numbers slowly increased.  However, with habitat being removed , koala numbers are spiralling down again.

It is indeed time that we change our statement as we look up and say in a voice loud enough for him to hear, “Yes, I will care for you and our Community of Life with understanding, compassion and love.”

This article was originally published in the VOICES FOR THE EARTH column in The Daily Examiner on January 16, 2017.

Note: Blinky Bill was a koala in a number of classic Australian children's stories written by Dorothy Wall.  The first of these were published in 1933. 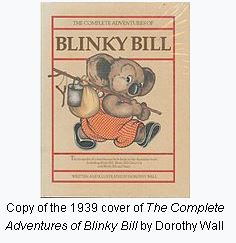 Posted by Clarence Valley Conservation Coalition at 2:23 am

Email ThisBlogThis!Share to TwitterShare to FacebookShare to Pinterest
Labels: Koalas, Koalas and Habitat Loss, Voices for the Earth column

Brett will discuss marine life including large sharks, humpback and sperm whales and he will show us some
spectacular underwater footage.