Conservationists in NSW have been appalled at the NSW Government's new plans for logging  state forests.  The lack of proper and meaningful consultation has further angered those concerned about the decimation these new plans will bring to public forests - forests which belong to the people of the state - not to the logging industry.


The North Coast Environment Council has accused the NSW Government of trying to
keep the public in the dark and attract as little attention as possible for its proposals for
public forests to increase logging intensity, zone 140,000 hectares for clearfelling, remove
the need to look for and protect most threatened species before logging, reduce stream
buffers and open oldgrowth forest up for logging.

“The Government is trying to hide their intent by holding NO public consultations. So
the NCEC, North East Forest Alliance and local conservation groups are collaborating in
organising public meetings across the region to explain what is proposed to interested
community members.

“The first meeting will be on Wednesday May 30, in Port Macquarie at 6.30pm at the
CWA Rooms at 11 Horton St.,” said Susie Russell, NCEC Vice-President.

“In the weeks that follow, there will be meetings in Bellingen, Coffs Harbour, Lismore,
Kyogle, Byron Bay, Murwillumbah and Nimbin.

“While the Government has documents open for comment, we know the destructive
outcomes are already pre-determined. Conservationists were explicitly barred from being
able to provide information or comment to the Natural Resources Commission during the
drafting phase. And now, unlike the fanfare about the koala strategy a few weeks ago,
there is minimum publicity being sought by Government Ministers about the weakening
of the logging rules.

“If the proposed rules are implemented, every population centre on the north coast will
see its water yields drop as intensive land clearfell logging dries out the catchments.
There will be increased erosion and sedimentation of streams from decreased stream
buffers. The extinction cliff for many of our native animals and plants will be reached
faster as there will no longer be a requirement to look for them prior to logging. The
carbon storage capacity of our forest estate will be greatly diminished as logging intensity
increases and the dense, young regrowth is more flammable than the mature forests it
replaces.

“All this at a time when climate change is accelerating and the planet's temperature is
rising. We need now to be protecting our future by maximising the shade, natural water
and carbon storage, while connecting habitats to enable animals to move to more suitable
areas,” she said.

“As well, our earlier predictions that areas of forest that have been off-limits to logging
for the last 20 years will now be logged was correct. Areas of oldgrowth, stream
protection buffers, high quality koala habitat are to be sacrificed to meet wood contracts.
The logging industry is now engaged in a last gasp hunt for the few remaining bigger trees.
Most of the smaller logs it has to clear to get to them, are the new export woodchipping
industry. But this time they are for fuel in wood-fired power stations, rather than pulp for
paper.

“When it comes to forestry in NSW and across Australia, we are going backwards. We
are seeing more intensive logging for lesser value products. This is the modern equivalent
of whaling. Only a social movement will stop them. Government is well and truly in their
pocket,” Ms Russell said.
Posted by Clarence Valley Conservation Coalition at 5:46 am

CVCC History in the news

The history of the CVCC and the upcoming ReWeavers Dinner made the local news today. Its not too late to book your seat for what will be an inspiring night. See Invitation in the previous post for details. Or CLICK HERE for info.
Article by Daily Examiner

Note:  There is an error in The Daily Examiner report below.  Daishowa International did not have a pulp mill in the Clarence Valley as indicated in the second column.  It had a woodchip mill at Eden on the NSW South Coast. - Leonie Blain. 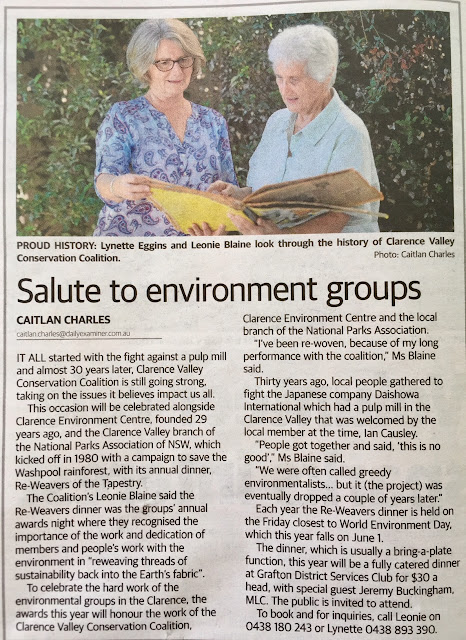 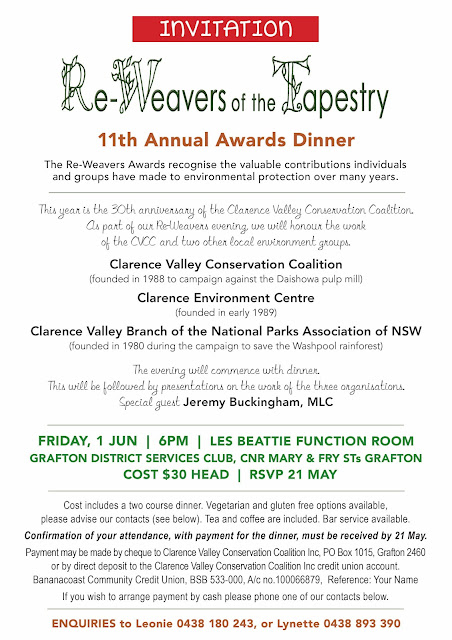 CVCC TO CELEBRATE OF THIRTY YEARS OF ACTIVISM

The Clarence Valley Conservation Coalition (CVCC) will be having its 30th anniversary later this year. The anniversary is in September but the major celebration will be held on Friday June 1st during the Re-Weavers Awards Dinner.

The CVCC was formed in 1988 following the announcement that the Japanese company Daishowa International, which already had a wood chip mill on the NSW South Coast, was planning to establish a $450 million chemical pulp mill in the Clarence Valley.

The proposal for the mill was announced in the local paper The Daily Examiner on August 30.  Ian Causley, the NSW Minister for Natural Resources and the Member for Clarence, the local state electorate, heralded the proposal claiming that it was "a red letter day" for the Clarence and the state.

Some community members welcomed the announcement, claiming the mill would provide an enormous boost to the local economy.

But not everyone welcomed it.  Many were concerned about the impact such a large industrial development would have on the local environment – not just of the Clarence Valley but of the whole NSW North Coast because it was obvious that such a large mill would be drawing its feedstock from across the region.  Concerns included the amount of water this mill would use, the decimation of the forests, the effect on the wildlife of the forests,  the likelihood of poisonous effluent being released into either the Clarence River or the ocean as well as the likelihood of air pollution.
On 19 September 1988 concerned people met in Grafton to discuss the proposal and consider what action should be taken.  This meeting resulted in the formation of the CVCC.

It was decided that the CVCC would gather information on the proposed mill, disseminate that information and seek support throughout the Clarence Valley and elsewhere on the North Coast.

In the ensuing months the group sought information both locally and internationally on pulp mills and pulping processes and attempted to obtain information from the company and governments on the proposal.  Public meetings were held in Grafton, Iluka, Maclean and Minnie Water as well as in other North Coast towns.  In addition the group produced information sheets, issued many media releases, participated in media interviews, distributed bumper stickers, met with politicians both in the local area and beyond, and wrote letters to politicians and The Daily Examiner.

The proposal was eventually abandoned. The strength of local opposition and the hard work and commitment of campaigners in the CVCC and other community organisations on the North Coast paid off.  It demonstrated that strong community opposition to a huge, inappropriate development could defeat it.