The New South Wales Government has introduced legislation to prevent the regulation of greenhouse gas emissions from Australian coal burned overseas. The move came just days after the Government launched a review of the Independent Planning Commission, following a sustained advertising and lobbying campaign by the NSW Minerals Council.

25 October 2019: The Environmental Planning and Assessment Amendment (Territorial Limits) Bill 2019 was introduced into Parliament on Thursday.

“A day after the Minerals Council gave evidence to ICAC that they were lobbying privately and publicly for changes to the law, the Government has capitulated, without regard for current or future generations.

“In 2019, as the rest of the world rapidly phases out fossil fuels, we should be urgently planning for a just transition for coal and gas communities and a safe climate for our children. Instead, the NSW Government wants to make it law to ignore Australia’s most significant contribution to the problem - emissions from exports. It would appear that this Government’s only plan for addressing the climate crisis is to turn a blind eye.

“The most significant climate judgment in this nation’s history was based on scientific evidence. The Rocky Hill decision made it clear – emissions from Australian coal are not something that happen ‘over there’, they have a deep and lasting impact here at home. That’s why we have to take responsibility for those emissions, and it’s appropriate our laws reflect that. A decision to remove that requirement would be a retrograde step and inconsistent with a science-based response to managing climate change.

“The greatest trick the Minerals Council has played is to hoodwink us into thinking that our export of fossil fuels has no effect locally. That is wrong. It is not based in science.

“As Professor Will Steffen said in the Rocky Hill case, “it is one climate system”. Because of that, burning NSW coal overseas impacts communities here at home. It defies logic that in a time of severe drought and bushfires, a political party claiming to be for and from the bush would legislate against consideration of climate impacts from Australian coal on our communities. Perhaps they don’t think the impacts of climate change on NSW communities matter. Perhaps they don’t accept the science. In either case, it is an indictment on the Government.

“The beauty of the Rocky Hill decision was its basis in science and fact. The appalling thing about the Government’s decision is that it’s based on pure politics and self interest.”

Posted by Clarence Valley Conservation Coalition at 4:49 am

Over the last year or two an increasing number of people have realised that climate change is not something that will affect us in twenty or more years.  It’s affecting us now. The continuing severe drought as well as the unprecedented fires in this country and elsewhere are some of the signs that time is running out for effective action to prevent the onset of more catastrophic impacts .

This realisation about the present reality and mounting threat of climate change has been reflected in two significant decisions against coal projects in NSW this year.

In late 2017 Gloucester Resources had its application for the Rocky Hill Coal Project near Gloucester on the Mid North Coast rejected by the Independent Planning Commission. The company appealed this decision in the Land and Environment Court.

Early in 2019 this Court refused the appeal on a range of grounds, but what was significant was what was said about climate change. The chief judge stated that emissions from the mine and its coal product would increase total global greenhouse concentrations at a time when a rapid and deep decrease in emissions was needed.

Last week the Independent Planning Commission announced it had refused approval to Kepco’s even larger coal mine in the Bylong Valley, 55km from Mudgee.  In a statement the Commission said, “The project is not in the public interest because it is contrary to the principles of ESD [ecologically sustainable development] - namely intergenerational equity because the predicted economic benefits would accrue to the present generation but the long-term environmental, heritage and agricultural costs will be borne by the future generations.”

In referring to the greenhouse gas implications of the mine, the Commission cited the comments made by the Land and Environment Court Chief Judge in the Rocky Hill mine judgement earlier this year.

These decisions have set a precedent in NSW which may serve as an example to other states. In addition it has been welcomed by those concerned about climate change who oppose the opening of new coal mines.

This article was originally published in the VOICES FOR THE EARTH column in The Daily Examiner on September 23,  2019
Posted by Clarence Valley Conservation Coalition at 4:34 am

RIGHT TO FARM BILL AN ATTACK ON RIGHT TO PEACEFULLY PROTEST

The NSW Government's Right to Farm Bill which is currently before the NSW Legislative Council has been very widely criticised by lawyers, unionists and environmentalists because of its scope and harsh penalties.

The Bill purports to be about protecting farmers from people going onto their land and disturbing their farming activities and is claimed to be in response to animal rights protests on farms. However, it appears to be a further attempt by the Government to limit the right of people to peacefully protest - a right which is a cornerstone of our democracy.

The Bill deals with "inclosed lands".  This covers many more locations than farms.  The term includes industrial worksites, forests, mine sites, schools and banks and other commercial operations.

Was this an oversight - the unintended consequence of a poorly drafted piece of legislation?  If it was, the Government could easily amend it so that it only applied to farms and dealt with farm trespass.

However, despite the criticism already received, the Government does not seem interested in doing this.  So it would appear that the broad scope of the Bill is exactly what was intended.

Furthermore, those concerned about the over-reach in this Bill claim that the Government already has adequate laws to deal effectively with farm trespass.

The Government's fear of public protest started it on this path to attacking the rights of protesters several years ago. Its anti-protest laws in 2016 led to the introduction of very heavy fines and prison terms.

It would seem that those draconian measures are now regarded as insufficient to intimidate those who want to protest, who want to shine a light on practices or policies  by government or others that are unsustainable or unjust.

The current Bill increases penalties even further.  The penalty for someone acting alone is a fine of $13,200 or a year's imprisonment or both.  Those acting with two or more people are liable to a fine of $22,000 or imprisonment for three years.

Penalties such as these are intended to intimidate community members so that they will be wary about undertaking protests in inclosed lands for fear they will be fined or imprisoned.

Major environmental issues - particularly in State Forest management and the growing catastrophic biodiversity loss - highlight the need for community action - including protests - to alert the broader community and encourage the Government to improve its stewardship of our natural world.

As it stands this Bill is an attack on an important democratic right.  It also highlights why Australia needs a Bill of Rights, something most other liberal democracies have to help protect citizens' rights. 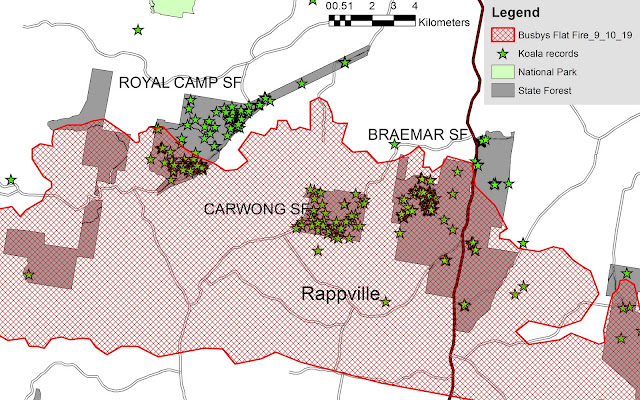 These days we often hear about pollution in its various forms but another form of pollution – light pollution - is a problem which many people are not aware of.  Light pollution is gaining increasing attention from astronomers, environmentalists and people who wish to reduce energy consumption.

What is light pollution?  The International Dark Sky Association defines it as the inappropriate or excessive use of artificial light. There are four components of light pollution - glare, skyglow, light trespass and clutter.

According to a 1916 study, 80% of the world’s population lives under skyglow.  Major population centres like the United States and Europe are heavily impacted.  There 99% of people are unable to experience natural night.

Light pollution is not a concern merely because of aesthetics and the need to conserve energy.  It disrupts ecosystems and wildlife. Plants and animals depend on the daily cycle of light and dark to govern life supporting behaviours such as reproduction, nourishment, sleep and protection from predators.

This article was originally published in the VOICES FOR THE EARTH column in The Daily Examiner on September 9, 2019

Posted by Clarence Valley Conservation Coalition at 1:42 am