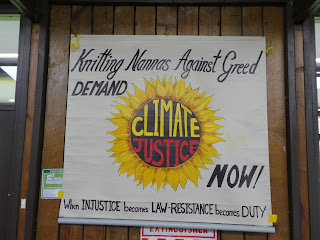 THE INCREASING THREAT OF WILDFIRES

Recently the Clarence Valley Conservation Coalition discussed the ever-increasing threat from fire to biodiversity, humans and our built environment, and decided there needs to be an urgent review of fire management across the country.

The decision to lobby for a review was triggered by the fact that the Clarence Valley had been ablaze for over a month with fire-fighters brought into the district from elsewhere, along with water-bombing aircraft, to support local brigades who had been stretched to the limit for weeks. Many of the scores of fires that erupted during the month were illegally lit, and many more remained uncontained for days or even weeks. And this all took place in winter!

The catalyst for this frenzy of burning was seemingly the announcement by the Rural Fire Service in the last week of July about bringing the “fire season” forward to the 1st of August. Since that announcement landowners, pyromaniacs, arsonists, and the just plain stupid, have been dropping matches everywhere across the valley, and residents have had to endure the choking smoke haze that has blanketed the valley ever since. Stinging eyes, blocked sinuses, and sore throats being only minor irritants compared with what asthmatics and those with lung ailments have had to endure.

Climate change is having an enormous influence on fire behaviour, not just here in Australia, but around the world. Unmanageable fires are now commonplace despite the introduction of new sophisticated techniques like fire suppressant chemicals and aerial water bombing. Catastrophic winter fires are now being reported on a regular basis on both sides of the equator, and this year summer fires even caused problems within the Arctic Circle.

No country is being spared. The human toll is mounting as is the cost of destroyed homes and infrastructure, but that comes nowhere close to the toll on the environment and wildlife. In short in many areas of the world, biodiversity declines as a direct result of fire, are leading to ecological collapse, something I fear we humans will feel the impact of in the not too distant future.

This article was originally published in the VOICES FOR THE EARTH column in The Daily Examiner on September 3, 2018.

Email ThisBlogThis!Share to TwitterShare to FacebookShare to Pinterest
Labels: Burning Off, Bushfires and Climate Change, Voices for the Earth column

THE OCEANS AND CLIMATE CHANGE

Over recent years the land-based effects of climate change have become increasingly obvious.

Severe droughts are occurring more frequently. All of NSW is now in drought.

During August there were serious bushfires locally as well as elsewhere in NSW and Queensland. Severe winter fires raise concerns about what summer will bring, given the record summer temperatures in recent years.

In other parts of the world huge fires have been destructive once again in California and even above the Arctic circle in Sweden.

The oceans are also increasingly showing the effects of climate change.  Ocean warming’s effect on the world’s coral reefs, including the Great Barrier Reef, has been widely publicised.

Warming oceans have had other impacts with changes to ocean ecosystems more widely.

A recent United Nations report, with contributions from more than 90 experts from 20 countries,  looked at fisheries and climate change around the world.  Their report shows that marine systems around the world are undergoing rapid environmental change.

Many fish species are changing their distribution. For example the northern movement of European mackerel into Icelandic waters has led to conflict with southerly fishing countries.

While some species will increase, models predict seafood stocks in tropical regions will decrease, where people can least afford alternative foods.

There is rapid ocean change around Australia with waters off the southeastern and southwestern coasts being particular warming hotspots.  Our tropical oceans are warming almost twice as fast as the global average.

More than 100 of our marine species have begun to shift their distributions southwards.  Seagrass, kelp forests and mangroves, as well as coral reefs, have been affected by marine heatwaves and other extreme events such as cyclones.

The report states that Australian commercial fisheries are clearly already being affected by climate change.  This industry will obviously need to adapt to remain sustainable.

While humankind may introduce adaption strategies to cope with the current effects of climate change, it needs to act urgently to curb emissions to limit future global temperature increases.


We need a Federal Government that takes this threat seriously and acts effectively.


This article was originally published in the VOICES FOR THE EARTH column in The Daily Examiner on August 27, 2018.

Email ThisBlogThis!Share to TwitterShare to FacebookShare to Pinterest
Labels: Climate Change and Oceans, Voices for the Earth column

The Clarence Valley Conservation Coalition’s September Earth Matters session will be held on Monday September 17 at 5.30 pm. It will be a screening of the documentary “Sacrifice Zone: the story of the real Australian gas crisis”.

“Sacrifice Zone” deals with the threat of invasive gasfields facing communities west of the range.

Santos wants to establish multiple gasfields in NSW, starting in the Pilliga forest, near Narrabri. This area is a critical recharge zone for the Great Artesian Basin.  The water in this basin is vital for communities and agriculture across vast areas of inland Australia. In addition the Pilliga forest is a very important natural area, habitat for a variety of threatened species including the koala.

This film by Cloudcatcher Media illustrates the concerns of community members and the Great Artesian Protection Group.
The CVCC is asking those attending to contribute a gold coin as a donation to Cloudcatcher Media.

The venue is the Staffroom at Grafton Primary School, Queen Street, Grafton from 5.30 – 7 p.m. on Monday September 21.

Earth Matters is a session on the environment which is conducted every two months by the Clarence Valley Conservation Coalition ( clarencevcc@gmail.com ). 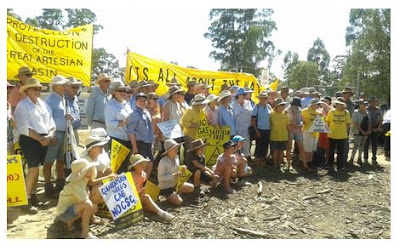 Posted by Clarence Valley Conservation Coalition at 4:36 am