FIRE LOSSES MUST BE PROPERLY ACCOUNTED FOR - NEFA

The North East Forest Alliance  (NEFA) is calling for an immediate 10% reduction in wood supply commitments to north-coast sawmillers from public forests because of the widespread death of trees due to the Black Summer bushfires, and a freeze on any new commitments until sufficient plots are sampled to accurately quantify remaining timber volumes.

The Forestry Corporation estimate is that there has been a significant loss of trees across at least a third of the north coast’s State Forests (north from Gosford), with a loss of 10-50% of large sawlog sized trees over 30 cm diameter at breast height, and 50-100% of smaller trees, according to NEFA spokesperson Dailan Pugh.

“The worst affected stands were those logged in the previous 4 years where over 90% of trees were killed.

“It is bewildering how the Forestry Corporation can conclude from this data that there will only be a 4% reduction in high quality sawlogs from the north coast over the next decade.

“It appears the NSW Government intends to rely upon this simplistic review to sign new Wood Supply Agreements to replace the current 20 year agreements due to expire in 2023.

“What is most perplexing is that the Forestry Corporation did not remeasure any of their 659 field plots within the heavily burnt forests to obtain real data on impacts so that they can more accurately quantify impacts and future yields.

“The last two times the NSW Government gave sawmill owners guarantees for specific timber volumes in 1998 and 2003 they were found to be gross over-estimates and it cost NSW taxpayers over $12 million to buy back non-existent timber we gave to sawmillers for free.

“At the very least the Government owes taxpayers a full and proper assessment of the bushfire impacts before they consider repeating past mistakes.

“Though with bushfires and droughts increasing as climate heating accelerates, it is time we stopped logging public forests to increase their resilience and maximise their carbon storage” Mr. Pugh said.

Posted by Clarence Valley Conservation Coalition at 6:19 pm No comments:

Because of the urban heat island effect, cities become much hotter than surrounding rural areas because of factors such as pollution, building density and extensive hard dark surfaces (buildings and asphalt roads) which absorb heat.  Traffic, industry and electricity usage also contribute to increased urban temperatures which may be from two to ten degrees higher than in surrounding rural areas.

While the urban heat island effect is a major problem in cities, it also affects smaller urban areas.

One of the effective cooling strategies adopted by many councils is increasing street canopy cover with good shade trees.

Grafton is particularly fortunate with the street trees in its older sections – a result of the foresight of early community leaders.

Well-established trees in some parts of the street provide both good shade and a pleasant outlook. The two photos below show the tree cover on the western side of both the Prince Street - Victoria Street and the  Prince Street-Fitzroy Street intersections.

In its newer street plantings in Grafton’s main street  Clarence Valley Council has shown an indifference to any commitment to green-scaping and provision of shade trees to reduce the heat island effect. The palms planted at the pedestrian crossings between Fitzroy and Pound Streets provide negligible shade. 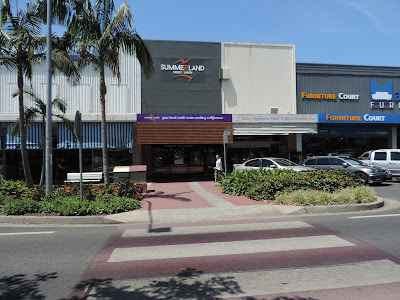 And shady lillypillies were replaced with low shrubs on both sides of the informal crossing near Ray White between Fitzroy and Victoria Streets. 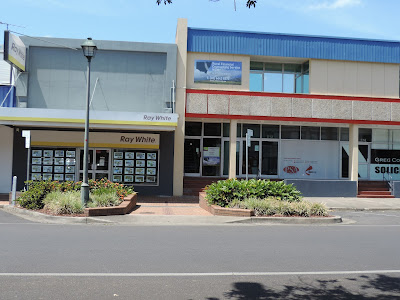 This is a busy part of town which particularly needs shade because of pedestrian usage and heating resulting from traffic flow.

The situation in newer parts of Grafton

In most of the newer areas streets are narrower and so are verges (“nature strips”) which provide no space for reasonably-sized shade trees.  And this opportunity is further restricted by the fact that services such as power and water are generally located underground along these narrow verges.  In addition, block sizes in new developments are generally smaller and the current tendency to build large dwellings on them leaves little garden space for planting shade trees within the block.

Obviously this ‘modern’ problem is not restricted to Grafton or to new developments in the Clarence Valley.

As the climate continues to warm, Councils like Clarence Valley Council will be expected to provide a better solution for the heat island effect than palms and low shrubs as well as implementing changes to developments to ensure that verges or nature strips are wide enough to allow planting of reasonably sized shade trees in residential areas.

A recent University of Newcastle report examined the economic and environmental benefits that could result from the creation of the proposed Great Koala National Park (GKNP) on the NSW Mid- North Coast.

Kevin Evans, spokesperson for the GKNP Steering Committee, said the research demonstrated “the Great Koala National Park would make a significant contribution to the NSW economy and be a major job boost for the Mid-North Coast region just when it is so desperately needed.”

Habitat loss is a major threat to survival of the koala as a species.   The GKNP proposal was developed to increase koala habitat protection by adding 175,000 ha of native state forests to existing protected areas establishing a 315,000 ha reserve.  This new park would stretch across the local government areas of Coffs Harbour, Clarence Valley, Bellingen, Nambucca and Kempsey protecting an area that is home to around 20 per cent of the NSW koala population.

The proposal was initiated by Mid-North Coast conservation groups who commissioned an independent scientific assessment by ecologist David Scotts of the public native forests that would need to be protected if we are to avoid koala extinction.

“We fully support a government funded industry transition,” he said.

He believes that as NSW currently obtains over 85% of its timber requirements from plantation sources, an investment in expanding this resource should be a priority.

The urgent need for improved protection of koala habitat was confirmed by last year’s NSW Legislative Council inquiry into koala habitat which found that koalas could become extinct in NSW by2050 unless effective action was taken.  Significantly this inquiry said that the GKNP “has great merit”.

Mr Evans says that there is widespread community support for the proposal.  He wants the NSW Premier to live up to her promise of being the Premier to save our koala for future generations.

Published in the "Voices for the Earth" column in The Clarence Valley Independent , February 17, 2021.

Posted by Clarence Valley Conservation Coalition at 10:48 pm No comments: