What a wonderful sight! Water is now pouring into Lake Menindee after the gates were opened connecting it once again to the Darling-Baaka River. 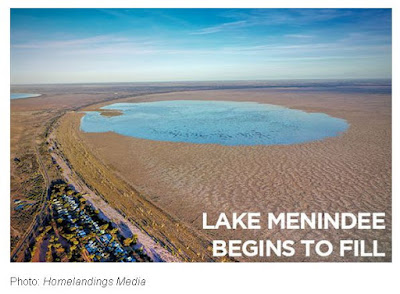 With water in the lakes, invertebrates will hatch, fish will breed, birds will arrive and the lake will be once again teem with life. The local community and Barkandji will enjoy the lakes and tourists will arrive to revive the local economy.

This is partly thanks to everyone who supported the campaign to stop the reconfiguration of the Menindee Lakes. The government had planned to do engineering works to cut off the lakes from the Darling-Baaka River in the name of “efficiency”.

The outcry from the community forced the government to pause those engineering works and open the gates to Lake Menindee to let it fill with flood waters from Queensland and northern NSW.

Even though the Menindee Lakes have been given a reprieve, this incredible ecosystem will remain under threat until the government promises to abandon the engineering once and for all.

You can be sure that the Nature Conservation Council will never rest until the lakes are saved and our rivers and wetlands get the water and the protection they so desperately need.

This means limiting irrigation upstream to sustainable levels to restore natural flows along the Darling-Baaka all the way to the Menindee Lakes and then on to the confluence with the Murray River at Wentworth.

It also means opposing unsustainable floodplain harvesting licences where water is diverted from our waterways into private dams.

Posted by Clarence Valley Conservation Coalition at 10:26 pm No comments:

THE AUSTRALIAN GOVERNMENT'S OBSESSION WITH GAS

The Federal Government’s National Gas Infrastructure Plan (NGIP) aims to expand the use of gas in Australia as part of the Gas Fired Recovery Plan developed last year with extensive input from gas industry heavyweights.  More sustainable ideas for a COVID economic recovery were ignored while the Federal Government shifted its fossil fuel obsession from coal to gas.

At a time when the science and common sense indicate rapid phasing out of fossil fuels is needed, our government acts as if urgency is unnecessary in dealing with the situation which has seen our nation suffer devastating bushfires, increasingly lengthy droughts and frequent extreme weather events like the recent flooding rains.

The NGIP will lock in for decades the use of a fossil fuel that ensures emissions continue to rise rapidly in this country, adding to all the problems that we currently have from the impacts of climate change.

The claim that gas is a less carbon-polluting transitional fuel in the move towards a carbon free world is nonsense.  Gas is a fossil fuel that produces emissions - in its production and use as a fuel - that are as polluting as those from coal.

Another claim that increased gas production is needed because we will soon face a domestic gas shortage is another furphy.  A new forecast from the Australian Energy Market Operator (AEMO) states there will be no gas shortfall in the coming years.

What makes this plan even worse is that public funds will be used to prop up an industry which is under economic threat because its time is up.  This is wasting taxpayer funds on what will inevitably become stranded assets - scarcely sound Government economic management.

If the Government was serious about both economic recovery after COVID and driving down our carbon emissions, it would be ramping up clean energy solutions in the renewable sector.

The NGIP is a gigantic con.  It should be scrapped immediately.  The Australian people and future generations of Australians deserve a much better policy from their Federal Government.

Published in the "Voices for the Earth" column in The Clarence Valley Independent , April 7, 2021.

Posted by Clarence Valley Conservation Coalition at 3:23 am No comments:

A talented group of young people from Byron Youth Theatre  presented “How on Earth” in Grafton and Maclean at the end of March as part of this year’s Clarence Valley Plunge Festival.

At a time when young people are becoming increasingly concerned about their future and the future of the planet, the “How on Earth” cast took audiences on an intriguing journey, exploring two different realities in the near future, asking what could be possible and how on earth we could create it.

This unusual event came to the Clarence through a partnership between the Byron Youth Theatre and the Maclean based community group Friends of Foresthaven’s Joyality Project.   Joyality’s Director Dr Eshana Bragg said they were happy to be part of this year’s Plunge Festival and were grateful for a NSW Government “Increasing Resilience to Climate Change” community grant as well as support from Clarence Valley Council and local community organisations.

As part of their research and development for the play, the Byron Youth Theatre cast members conducted interviews with other young people locally and nationally about their concerns about the environment, climate change and COVID 19.

Director Lisa Apostolides then wove their responses into a production that offers hope in a time of uncertainty and change.

“Young people have deep concerns about their future and rightly so,” Ms Apolstolides said.  “We may not have all the answers but we can choose how we respond to our changing world.”

The theatre presentations on  were followed  by an interactive and uplifting workshop to explore the meaning taken away from the performance , as well as discovering inspiration for positive action and building  resilience.

As well as the public performances in Grafton (March 28) and Maclean (March 30), there were performances and workshops in several local high schools.

Earlier presentations of “How on Earth” have been praised as inspirational and an authentic voice of youth dealing with an issue of obvious importance to them.

Posted by Clarence Valley Conservation Coalition at 5:09 pm No comments: