THE FEDERAL GOVERNMENT AND CLIMATE CHANGE

The Prime Minister (PM) Tony Abbott is pushing ahead with his election promise to repeal the carbon tax.  He is hoping to push this through before the end of the year even though the upper house - the Senate - remains under the control of the Labor Party (ALP) and the Greens until the new Senate is installed in July next year.  The PM is trying to persuade Labor to accept that he has a mandate for the change and that they should accede to his demand for its repeal early in the parliamentary sitting.  Behind his urging is the threat of a double dissolution some time in the new year if Labor does not fall into line.  Labor has so far rejected Abbott's demands.

The government has claimed that the repeal of the carbon tax will lead to a significant fall in electricity prices.  Environment Minister Greg Hunt has  claimed it will save households $3000 over six years.  A recent article by economic journalist Peter Martin (Why cut a nearly undetectable tax?) queries both claims about the impact of the tax and the impact of doing away with it.

Both Greg Hunt and the Prime Minister have denied that the fires have any connection to climate change.

In disputing the notion that climate change had any relationship to the fires, Mr Hunt claimed that he had checked Wikipedia to establish that bushfires had been frequent in Australia since before European settlement. It is truly astounding that we have a federal Minister claiming Wikipedia as a source of information on which he bases important public statements. It is also astonishing that Hunt dismisses so readily any notion that the extreme weather conditions we are experiencing could be associated with a changing climate.

The head of the United Nations climate change negotiations, Christiana Figueres,  indicated that there was a link between climate change and bushfires such as those raging in Australia, although she conceded that the World Meteorological Organisation had not yet established a direct link.  She stated, "but what is absolutely clear is the science is telling us that there are increasing heat waves in Asia, Europe and Australia; that these will continue in their intensity and frequency."

The Prime Minister refuted any connection between climate change and the bushfires, claiming Ms Figueres was "talking through her hat".   He stated,  "These fires are certainly not a function of climate change, they're a function of life in Australia."

Whether or not the fires can be directly attributed to climate change, it is obvious that weather conditions over a period of months created an extreme fire danger situation.  We had a warm dry winter followed by a much hotter spring than usual with strong winds.

Scientists are telling us that, as the climate warms, we can expect more severe weather, including more frequent, and fiercer, bushfires. That would appear to have been happening in recent years - with the horrific fires in Victoria in 2009, serious fires in Tasmania early last year and  now the fires around Sydney-Newcastle this month.

Ostrich-like behaviour from both the federal Environment Minister, who is responsible for the Government's "Direct Action" plan to reduce carbon emissions, and from the Prime Minister only serves to make them look foolish both in this country and abroad. It certainly does not make climate change go away or lessen the need for an effective response to this very serious issue.

Posted by Clarence Valley Conservation Coalition at 5:16 am


One of the important native species in decline in our area, as in other parts of NSW and southern Queensland, is the koala.  Last year concerns about the status of the koala in these states and the ACT led to its listing in these areas as vulnerable under the federal Environmental  Protection and Biodiversity Conservation (EPBC) Act.

Obviously just listing the species is only a small part of protecting it so that it survives in viable populations into the future.

Another part involves gathering more data so that planning for current and future protection can be based on sound knowledge of the species and its habitat use.

The Great Koala Count aims to build on existing knowledge by creating "a comprehensive picture of koala numbers and location …. by engaging the community in a once-a-year survey."  It is hoped that the count will be repeated annually.

The Great Koala Count (GKC) is being run by the National Parks Association of NSW (NPA) in partnership with the Great Eastern Ranges Initiative between November 7 and 17.  Koalas can be counted at any time during this period. 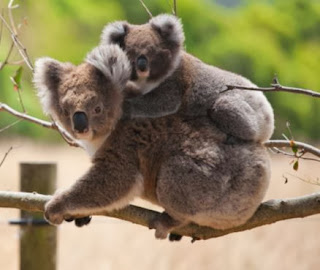 This is a Citizen Science Project which relies on the efforts of community volunteers to search for koalas and record sightings using a free SmartPhone app (BioTag) which has been developed by the NPA. The app enables the volunteer to plot the koala's position, record its picture and answer questions about it and the tree it inhabits.

The data on the animal is automatically uploaded when the volunteer is within phone range.
Those who do not have SmartPhones can also participate by uploading their data directly to the NPA Citizen Science Data Portal on the internet.

Anyone wanting to participate will need to register on the Great Koala Count website .  That includes those who will be using the SmartPhone app.

All the information collected in the GKC will be publicly accessible on the NPA's Citizen Science Data Portal and the Atlas of Living Australia.


FOR MORE INFORMATION ON KOALAS:

Posted by Clarence Valley Conservation Coalition at 4:50 am