The Grafton chapter of Knitting Nannas Against Gas (KNAG) held a knit-in at the Glenugie anti-CSG protest site on Monday 26th November.  Protesters have been at the drill site on Avenue Road south of Grafton in the Clarence Valley since coal seam gas company Metgasco commenced clearing and construction activities in the previous week. 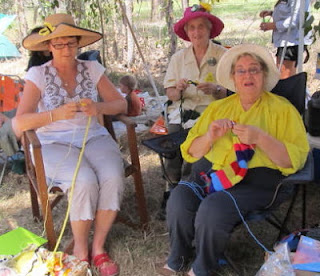 "The Nannas wanted to express their support for the protest at Glenugie," said spokesperson Leonie Blain.

"At this particular site there are serious concerns about the impact the drilling will have on the Coldstream River, a tributary of the Clarence River,  and the rural properties surrounding the drill site. "

"The Nannas are also concerned that Metgasco, despite its promises, has failed to keep the local community informed about its activities."

"We will be putting our concerns about Glenugie to local State Parliament member Chris Gulaptis when we meet with him this week," Ms Blain said.

Knitting Nannas from Lismore have also visited the site on a number of occasions to support the protesters. 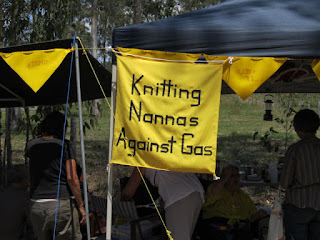 Posted by Clarence Valley Conservation Coalition at 12:53 am