Clarence Valley Council's  Wooli Beach Draft Coastal Zone Management Plan  (CZMP) was on exhibition  from 13th May to 4th June.  A decision on the Draft Plan will be made at Council's June meeting.

Wooli is a coastal village south east of Grafton. The old part of the village  is on a long, narrow sandy spit between the Wooli Wooli River and the sea.  It is under threat from severe storms and sea level rise as a result of climate change.

The Clarence Valley Conservation Coalition (CVCC) believes this Management Plan cannot be approved in its current form as it recommends an option that is prohibited under the Coastal Policy.

There are other options that are not explored or fully costed in the Draft CZMP.  These include  sand-pumping.

Another major concern is that beach nourishment is only a stop-gap measure.  With sea level rise and shoreline recession  serious planning should commence for long-term solutions such as re-location of critical public infrastructure and planned retreat from the Wooli Spit.

The CVCC's submission to Clarence Valley Council is printed below:

The Clarence Valley Conservation Coalition Inc (CVCC) urges Clarence Valley Council to reject the draft Wooli Beach Coastal Zone Management Plan (CZMP) in its current form.  It should not be adopted without amendment for the following reasons:

Obviously a prerequisite for this plan is consistency with the legislative and policy framework established by the Act and the Coastal Policy.  This consistency does not exist.  In fact, its key recommendation (a beach nourishment scheme with sand sourced from within Yuraygir National Park) is a clear contravention of action 5.2.9 of the Coastal Policy which prohibits sand extraction from coastal national parks.  On this point alone, this draft CZMP in its current form should be rejected.

The CVCC is astounded that a plan that flouts the current legal and policy framework governing coastal management could be placed on exhibition.

2.       The Plan does not offer a long-term solution to the coastal erosion hazard at Wooli.
While the plan acknowledges the long history of coastal recession on Wooli Beach and that the village’s population and infrastructure are at significant ongoing risk, it does not offer a long term solution.  Instead it seems to be suggesting waiting a further decade before serious planning work is taken to address the risk.  This ostrich-like attitude may comfort current residents and protect current councillors from their lobbying but it disregards one of the key objects of the Coastal Protection Act.  This object is “to encourage and promote plans and strategies for adaptation in response to coastal climate change impacts, including projected sea level rise”.

The plan implies that in the long term some serious planned retreat will be required by 2050 as 50% of the houses and the critical public infrastructure of the water tower, public school and marine rescue building will be at risk.  This process should start sooner rather than later and be more thoroughly canvassed in this draft document.

3.       The costs are under-estimated and benefits are primarily of a private nature
The costing for the proposed beach nourishment scheme given in Table 1 of the plan is based on the least expensive and non-permissible option of extracting sand from Yuraygir National Park.  The least expensive permissible option should have been fully costed if the beach nourishment scheme is to be recommended by the plan for the consideration of the Council and the Minister.

The CVCC notes that (based on the information in Table 1) 94% of the assets to be protected by the works are private assets.  While the plan states that funding for the BNS will be apportioned in consideration of the benefits it provides to both public and private lands, it would be extremely fanciful to believe that private landowners will be willing to contribute 94% of the $2.1 million required for each nourishment campaign.  It is far more likely that taxpayers will be footing the majority of the costs.  The Clarence Valley community will gain only marginal benefit from the works.  Is this a suitable use of public funds – whether or not these funds come from Council or the State Government or a combination of the two?

The CVCC further points out that the issue of coastal erosion/recession will increase along our coastline with sea level rise and the other effects of climate change including the predicted more frequent strong storms.  Obviously all levels of government will find it increasingly difficult to meet the expectations of those living in at-risk coastal communities.  Council needs to bear this in mind when considering this Draft CZMP.

4.       The potential environmental impacts of the sand extraction works are dismissed
The plan dismisses concerns regarding the potential environmental impacts of the works it proposes.  Based on information from a report completed in 1989, it claims the area in Yuraygir National Park identified for sand extraction was mined and is degraded.  The area marked on Fig. H3 appears to lie very close to a popular picnic area and walking track at Wilsons Headland and is well outside the area covered by the mining lease in the 1970s.  The area is vegetated and is certainly not degraded. It can be assumed therefore that the environmental impacts of this option are much greater than the plan acknowledges.

Much more detail should have been provided on the other options for sourcing the sand for beach nourishment – for example: from south of the training wall, Wooli River and marine sources.

5.        Lessons from other beach nourishment schemes
If Council is committed to beach nourishment, even though it is only likely to be a short-term stop-gap measure to placate current community members, then it should heed the evidence of similar
schemes in Australia.  The only ones that work involve sand pumping bypasses around the barriers to the northerly progression of sand.  This has been proven to work in the southern Gold Coast and is proving effective at Coffs Harbour to reduce the coastal erosion hazard at Park Beach.

In the case of Wooli, this would involve sand pumping from the vicinity of Jones Beach around the training walls at the mouth of the Wooli Wooli River.  It should be noted that there are specific provisions in the Marine Estate Management Act 2014 which allow for sand extraction from marine parks for conservation and risk management purposes, and no prohibition is contained within the Coastal Policy.  So, unlike the preferred option given in the draft CZMP, no legislative or policy barriers exist for this alternative.

The CVCC regrets that Council has progressed no further in the management of this section of the coast than it had in 2010.  The current draft plan is a short-term document which does not deal with the reality of the situation facing Wooli and provides false hope to its community. 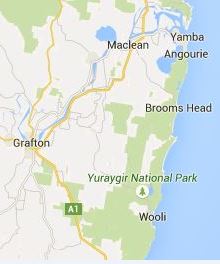 Posted by Clarence Valley Conservation Coalition at 4:59 am