A WALK IN THE PARK


In mid August, I was prompted to visit the Fortis Creek National Park. Where's that? I hear you ask, and it's likely that very few Clarence Valley residents, much less visitors to the area, have any idea where it is. Even the Department's web site is pretty uninformative, stating its location and geology, explaining only that: “The reserve contains vegetation associated with sandstone geology and provides opportunities for low-key and self-reliant nature-based recreation”.

What an understatement that is. At the right time of year – late winter to early spring, the park is a wonderland of flowering plants many of which can only be found on the local sandstone outcrops, and nowhere else in the world.

Much of that floristic beauty can normally be seen from the Coaldale Road, but this year much of that had been burned, so we opted to walk in to Morgan's Camp (no more than a dot on the map), a hike of some 12 km round trip, and enjoy the breath-taking profusion of colour on offer. Splashes of red Boronias and Match heads, yellow wattles and various bush peas species, and white Melaleuccas, Hakeas and Wedding Bushes covered the landscape.

The diversity, and significance of the flora is outstanding, and by basically observing little more than the road verges, we were able to identify more than 200 plant species, including 5 that are listed as threatened, 4 others that have been identified as meeting the criteria for listing, along with 20 species that are protected under the National Parks and Wildlife Act. 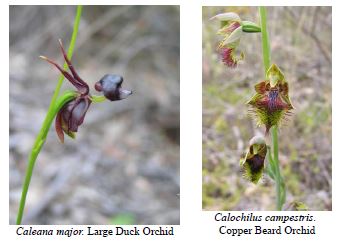 We actually met up with the Park Ranger on the day.  He made the comment that it was wonderful to see people walking in and enjoying the park, giving us the impression that this was not common. I can really recommend others to take the opportunity, particularly during the late winter – early spring flowering season, and make time, and to look closer for the small but amazing ground orchids that also occur there.

This post was originally published in The Daily Examiner on 26 October 2015.
Posted by Clarence Valley Conservation Coalition at 3:14 am