The average person is generally unaware of the importance of Mangrove ecosystems which, according to researcher Professor Norm Duke of Queensland's James Cook University, “take in 50 times more carbon than tropical forests by area and act like nature's kidney”.
There are many species of mangroves, and Australia is home to 7% of the world's population, but our mangroves are under serious threat, not only from sea-level rise resulting from climate change, but seemingly from warming oceans as well.

James Cook University researchers have noted that huge areas of mangroves are dying along hundreds of kilometres of shoreline in Queensland and the Northern Territory, where entire populations have turned “a ghostly white”, leading to speculation that it could be the result of a period of hot water in the southern Gulf of Carpentaria.

Professor Duke compared the event to current coral bleaching on the Great Barrier Reef, which is also the result of warmer ocean temperatures. He pointed out that the mangrove deaths coincided with the same period when water temperatures were higher than normal. However, he was careful to say that more evidence was needed before any conclusions could be drawn.

Anecdotal evidence from fishermen at the small Gulf town of Karumba, a town that relies heavily on the fishing industry, suggests the mangrove die-back is also impacting negatively on fish stocks, a correlation Professor Duke agrees is what we would expect, as mangroves provide critically important breeding habitat for many fish species.

The Clarence River estuary is also home to a variety of mangrove species, with five species known to occur on the NSW north coast. They too are under threat, not from warming oceans, but from coastal development. The push by Council to rezone parts of the lower river as “working waterfront” to encourage the development of marine industries, could be just the thin end of a very much larger wedge, with the massive Yamba Port and Rail proposal raising its ugly head once again. Should that monstrous proposal ever receive the green light, mangroves could become virtually extinct in the lower Clarence. 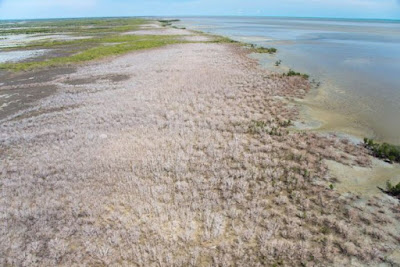 This article was originally published in the VOICES FOR THE EARTH column in The Daily Examiner on July 11, 2016.
Posted by Clarence Valley Conservation Coalition at 5:58 pm