PIED CURRAWONGS IN THE CLARENCE VALLEY

Pied Currawongs arriving in the Clarence Valley each autumn and winter is a natural event, but recently their numbers have been increasing. They are also hanging around longer, with dire consequences for our smaller native birds.

Currawongs look like crows, but with white undertail and wing feathers in flight. Mainly they inhabit the Ranges, living on fruit, insects and lizards in the forested gullies But in the colder months when food becomes scarce, they flock and head to the coast, where exotic park and garden trees, garbage bins, and growing numbers of fruit farms keep them supplied until spring when they return home to breed.

Currawongs' beaks are ferocious weapons, once known for piercing foil lids on the early morning milk delivery, but now turned on late winter-nesting birds' eggs and chicks, and even the birds themselves. Small migratory birds like the Silvereye, which travels greater distances than any bird of its size, now competes with big Currawongs for fruit, but frequently becomes the lunch.

Currawongs can pick off red bull-ants, and even one or two toxic spit-fire grubs without ill effect, so defenceless little birds and their offspring become tender morsels, with more taken as the predators increase.

Where currawongs stay longer they can also breed, and have been found feeding their own chicks on flesh torn from threatened adult Gould's Petrel.

A study of regurgitation pellets by the Australian National University showed that while all leavings contained fruits and seeds, almost half contained remains of birds. In another study by the Australian Museum, fake Willy Wagtail eggs that retained beak and teeth imprints showed 64% of nests were attacked, with 63% of those by birds with large bills. In 134 situations currawongs were actually seen attacking the eggs.

It is also found that currawongs target the fruit of invasive privet, which massive effort and large sums of taxpayer funds finds virtually impossible to eradicate.

It could in the end be up to individual landowners to discourage these birds, to force them to stay comfortably in the ranges where they naturally belong.

This article was originally published in the VOICES FOR THE EARTH column in The Daily Examiner on November 26, 2018. 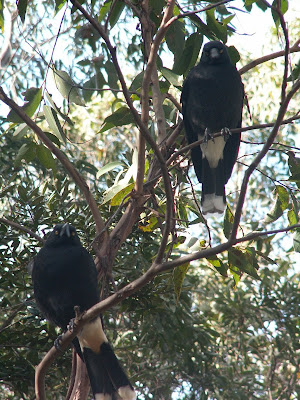 Posted by Clarence Valley Conservation Coalition at 2:48 am